The ongoing protests by Indian farmers against three laws initially passed as ordinances have grown from sporadic in August 2020 to the biggest civil society action in the world. Despite rounds of talks and even the creation of a committee by the Supreme Court, there seems little hope of a resolution while the problem is framed as a zero-sum game of either implementing the laws or repealing them.

But fundamentally, both sides in the current conflict ignore the problems central to the agricultural crisis in India: low farm productivity, high indebtedness, inappropriate cropping patterns and perverse incentives. Neither the implementation of the three laws nor their repeal will do anything significant to address these issues. The laws are focussed solely on contract farming (where farmers enter contracts with buyers directly, rather than going through licensed traders), deregulating the agricultural market to lessen the control of state governments, and the storage of grain. 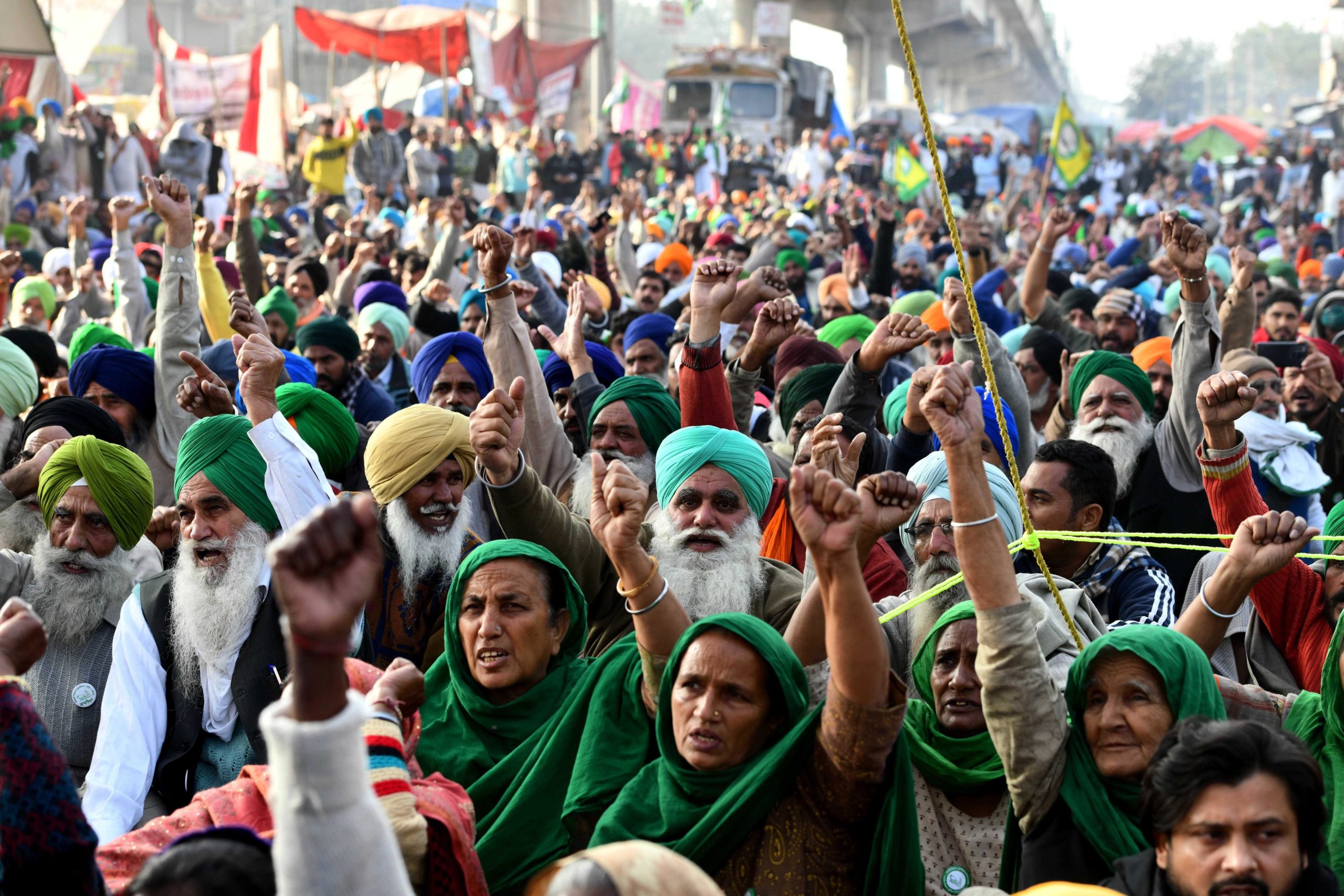 The proportion of India’s workforce in the agriculture sector was 54.6% in 2011, according to the government (although there is some dispute about the numbers). Between 52% and 55% of these people have no means of irrigation, and are dependent on rain-fed agriculture, whether one goes by government estimates or the atlas produced by the Revitalising Rainfed Agriculture Network. In other words, the livelihoods of at least a quarter of the Indian working population are directly dependent on rainfall.

As global temperatures have risen, rainfall has become more erratic, with longer droughts and shorter periods of more intense rainfall and floods. Not only does this directly impact productivity, research has also shown rising carbon dioxide levels are bringing down the nutritional value of crops.

The impact of these changes on those dependent on rain-fed farming is devastating, but those with access to irrigation are not spared either. Unpredictable rainfall patterns mean crops have less time to grow, reducing yield over time. Farmers resort to more fertiliser use and water to compensate, degrading the quality of soil and lowering groundwater levels. Insecticide use has also increased, not just to save the smaller amount of crops grown but also because pest populations change with climate patterns. In January 2019, the Ministry of Agriculture and Farmers Welfare estimated that wheat production will decline by 6-23% by 2050 due to the impacts of climate change.

The uncertainty of the Indian farmer is not just how much he is able to produce, but who he will sell it to and at what price. (Farmers are often referred to as he/him in India because though 73.2% of rural women workers are involved in agriculture, only 12.8% own land, limiting their ability to sell produce as “their own”.)

So far, the government has set a Minimum Support Price (MSP) for 23 crops every cropping season. Agricultural markets run by state governments are obliged to pay this. These markets buy only about one-third of the amount produced, but the MSP acts as a benchmark figure around which the price can be negotiated by private actors.

If large agro corporations start acquiring produce, they are likely to lobby for policies such as free electricity, to keep their input costs as low as possible.

The three new laws do not discuss the MSP. But they have led to the fear that contract farming and buying more in the open market and less in regulated markets will largely negate the use of the MSP as a benchmark price, thereby reducing the bargaining ability of the farmer.

Climate change already impacts price points by causing uneven production. With production, hostage to weather patterns there is no guarantee a crop planted by a farmer months in advance will hit the market when it is experiencing a shortage or a glut. One of the new laws, which allows storage of more grain, further shifts economic power away from farmers to buyers, especially large corporate buyers.

The MSP is also a big part of the problem. The largest proportion of crops produced that are bought by the government are of rice (43.26%), wheat (36.24%) and cotton (29.51%). Such buying patterns by the government incentivise the growth of these crops nationwide, even in areas unsuitable for them. These are all water-intensive crops. This has also led to Indian states giving free electricity for agriculture, which benefits only farmers with access to irrigation and has driven groundwater further downwards. 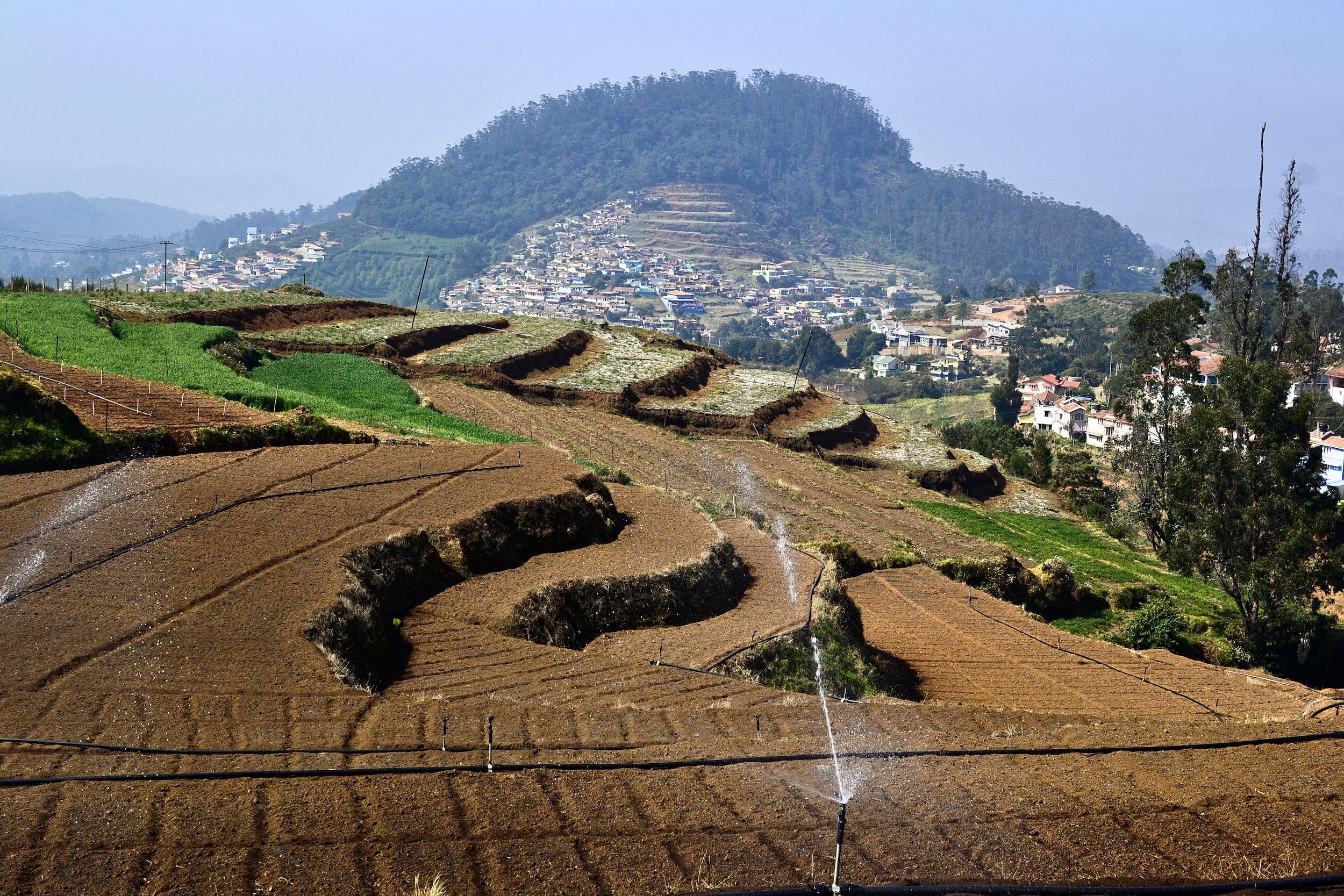 Terraced fields with water sprinklers on a farm in Tamil Nadu. (Image by: Vitalii Karas / Alamy)

Creating an MSP regime that incentivises climate-appropriate crops would require a state-led process, or one where the states and the centre find a way to cooperate. The recently passed laws do not address this. They are national laws that cannot work at this level of precision, especially as agriculture and water are issues in which the legislatures of states have primacy, not the centre. Worse, these laws may end up compounding the problems. If large agro corporations start acquiring produce, they are likely to lobby for the same policies such as free electricity because they will want to keep their input costs as low as possible.

One of the issues often overlooked is that the agricultural sector in India currently uses 84% of the country’s water resources. Despite that, productivity levels are far lower than in the US or China. Much of that water is only available for a short period – the four months or so of the monsoon. As climate change makes the availability of this water more uncertain, the country has to do water accounting in a way that makes sure it is using this precious resource optimally. This requires, first and foremost, an understanding of the need of smallholder farmers – both women and men – that make up the largest share of labour on Indian farms. These are the people least likely to have the economic, social or political clout to make themselves politically relevant.

The climate crisis is forcing a rise in input costs to the point where farming is no longer profitable for a very large number of farmers. The ongoing protests provide an opportune moment to look holistically at the issues impacting agriculture in India. While the protests are in the context of the specific laws that impact output pricing, the issues driving them – primarily of income insecurity – are not going away, and will only become more critical as the climate crisis worsens.

This article was originally published in The Third Pole.