Sutoyo, a forest conservation supervisor in Sumatra’s Harapan forest, points to scratch marks where a sun bear has gouged the black bark of a Dehaasia caesia tree exposing the bright red wood beneath. The bears, black with bright yellow patches on their chests, are among hundreds of vulnerable species threatened by the plans of Indonesian mining companies to build a highway through the forest in Jambi and South Sumatra provinces.

Other species threatened by the road include elephants and Sumatran tigers, both of which the IUCN has listed as critically endangered. Only around 400 Sumatran tigers are thought to survive in the wild, in a small area of the island.

Sutoyo works for PT Restorasi Ekosistem Indonesia (PT Reki), which is surveying the forest’s biodiversity in the areas most directly threatened by the planned new road. Civil society has called for the road to be built outside the Harapan forest concession area. But Siti Nurbaya, the minister of environment and forestry, has brushed aside concerns that the route would harm animals endemic to Sumatra.

In October 2019, the Ministry of Environment and Forestry granted a forest area utilisation permit (known in Indonesia as an IPPKH) to build the road through the Harapan forest. The permit is held by PT Marga Bara Jaya, a unit of Rajawali Corporation which is owned by tycoon Peter Sondakh.

Three coal-mining companies – PT Triaryani, PT Gorby Putra Utama, and PT Barasentosa Lestari – own mining concessions covering a combined area of more than 30,000 hectares in the North Musi Rawas region of South Sumatra, with coal reserves of around 1 billion metric tonnes. The coal is primarily exported to China and India.

The Harapan forest is a 98,555 hectare primary rainforest adjacent to industrial plantation forests, oil palm plantations and coal mining concessions. When complete, the 88km highway will allow firms holding coal and oil palm concessions to transport their commodities more quickly to a port along the Bayung Lencir River. At present, poor infrastructure restricts the output of the three mining companies. The current road is narrow and potholed in places. “On average, it takes three days to transport coal from the mining area to the port,” said Ibrahim, the head of external affairs for PT Triaryani. “In one day, we can only transport around 1,000 tonnes of coal because of the lack of road access… In fact, we’re able to produce more,” he said. 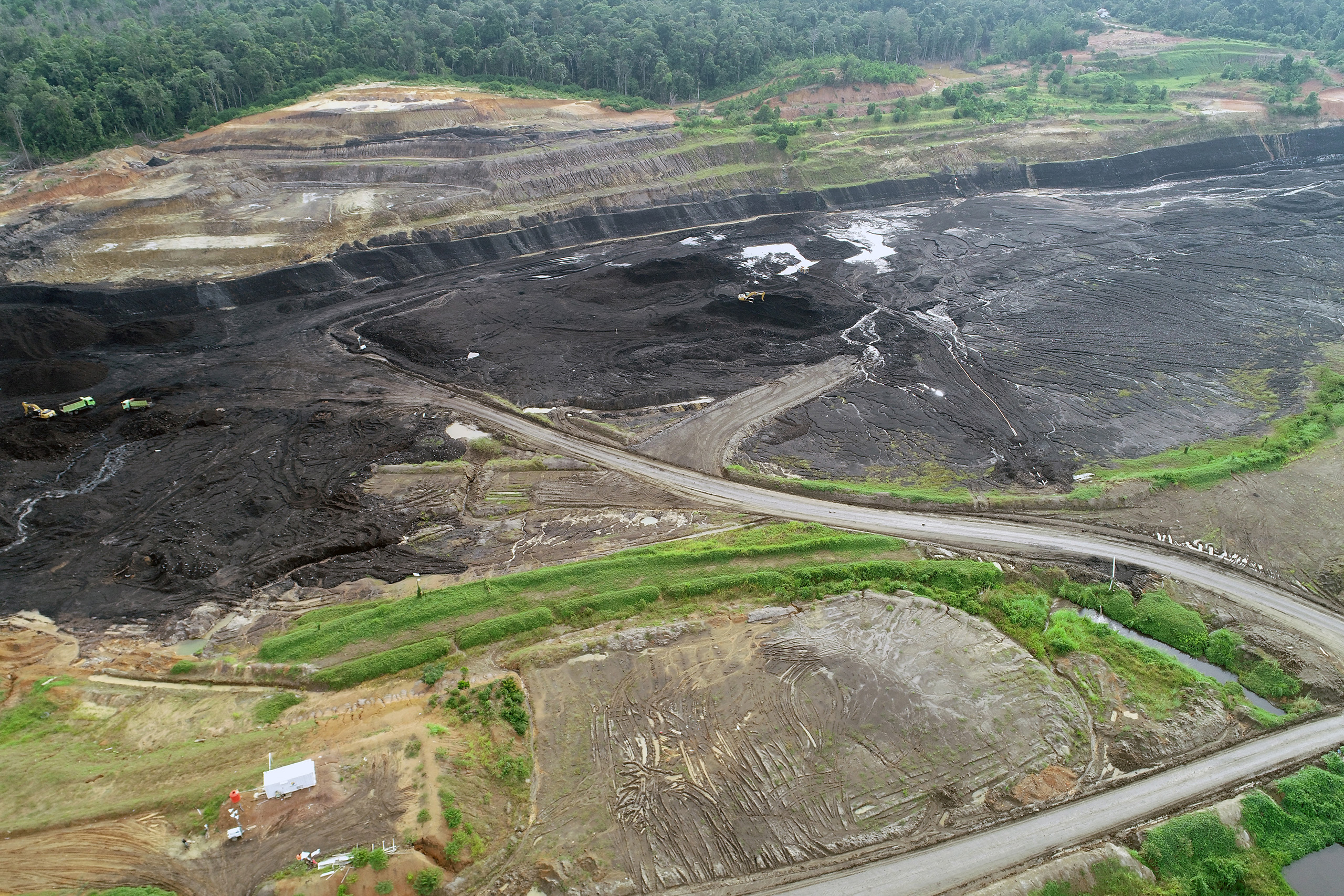 Adiosyafri, research and campaign director of Hutan Kita Institute, an environmental NGO based in South Sumatra, said putting a mining road through this ecosystem restoration area, designated in 2004 by the Ministry of Forestry and managed through a public-private partnership, would disrupt biodiversity, and “only benefit mining and oil palm companies in North Musi Rawas”.

Road-building company PT Marga Bara Jaya has chosen the shortest route, meaning the new highway will run through the Harapan forest for 26km. According to the construction company’s environmental impact assessment, the new road would be 40 metres wide with eight metres of drainage on both sides.

The document acknowledged that the road will cut through the habitat and crossing areas of Sumatran tigers and elephants.

PT Reki’s survey found that at least 620 animal species exist in the Harapan forest, which covers an area one and half times the size of Indonesia’s sprawling capital, Jakarta.

Of these, 102 animal species are endangered because of habitat degradation due to land being converted into plantations and mining areas. They include sun bears, listed as vulnerable on the IUCN’s Red List of endangered species, which notes “the most beneficial conservation measure in Indonesia and Malaysia would be protection of remaining forests from conversion to other land-uses.” Harapan forest is also home to 74 reptiles and amphibians, including the endangered spiny turtle and the world’s rarest species of stork. The storm’s stork shares the forest with 306 other bird species. Endemic to Sumatra’s forests, the stork has a pinkish-red bill, and adorned a  series of Sumatran stamps in 2009. There is also great floral diversity. At least 1,130 types of plants grow in the forest. Some are critically endangered, including Dyera costulata and Bornean ironwood (Dipterocarpus). 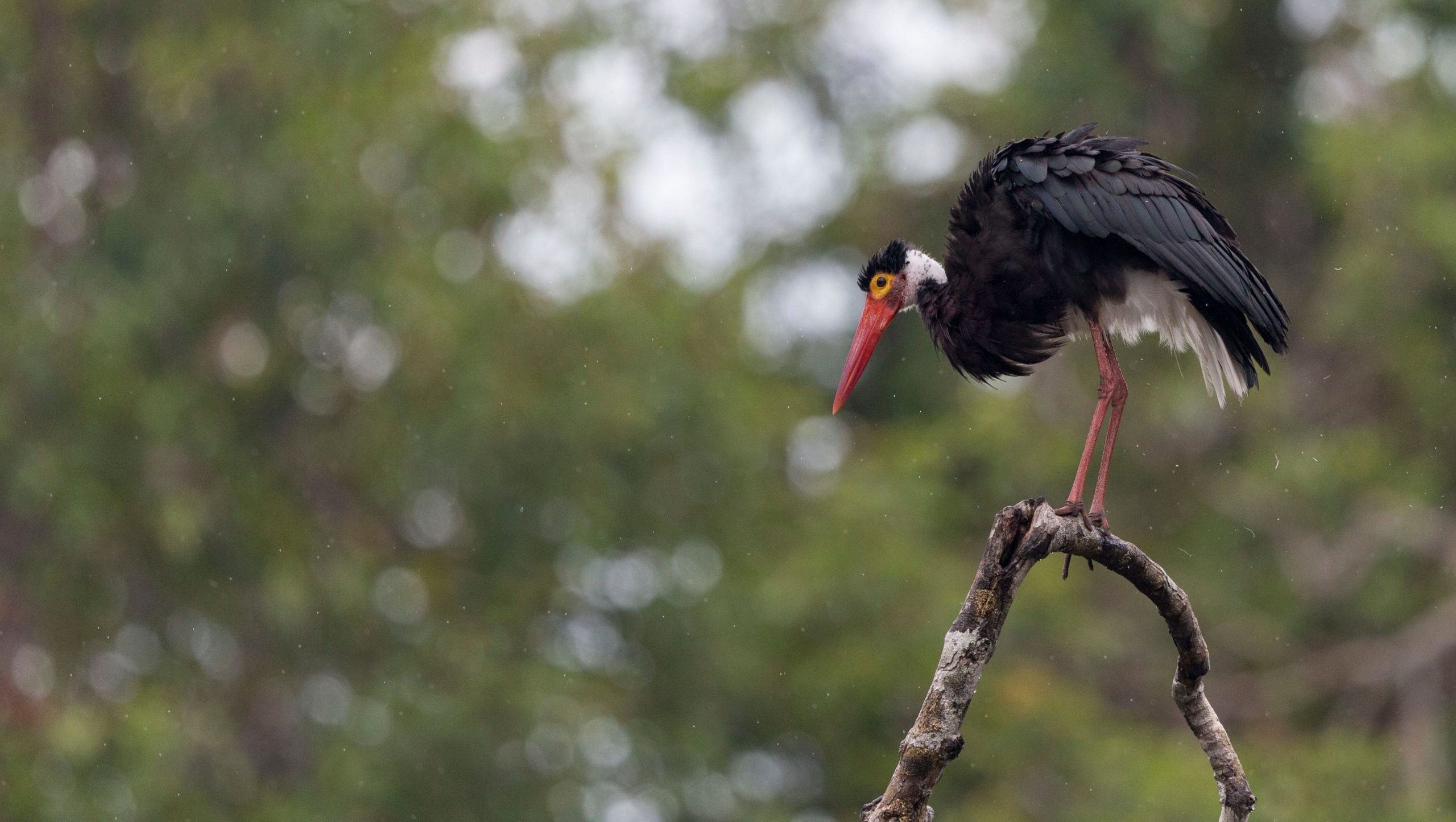 Indigenous communities, including the Anak Dalam Batin Sembilan, also rely on the forest for non-timber products, such as rattan, dammar gum (used in incense, bath salts and artists varnishes), jelutung resin, and honey.

Jupri, who is the customary chief of the Batin Sembilan community, says his people are used to growing plants and rice in the forest to meet their daily needs. They also use forest plants to treat illness. “It would be impossible to go to the hospital because it’s too far,” he said. The Batin Sembilan people’s home area in the forest is one and a half hours journey from the nearest village.

Harapan forest is also a water source for the Meranti and Batang Kapas rivers of South Sumatra, as well as the source of the Meranti and Lalan Sungai rivers in Jambi. The Batang Kapas and Meranti rivers are, in turn, sources for the Musi River, which passes through the provincial capital of Palembang before it empties into the Malacca Strait.

The forest also holds 10 small lakes that collect water. Clearing the forest for the mining road would disrupt its function as a water source, a biodiversity habitat, and the source of livelihood of the Batin Sembilan people, said Hospita Simanjuntak, PT Reki’s communications manager. 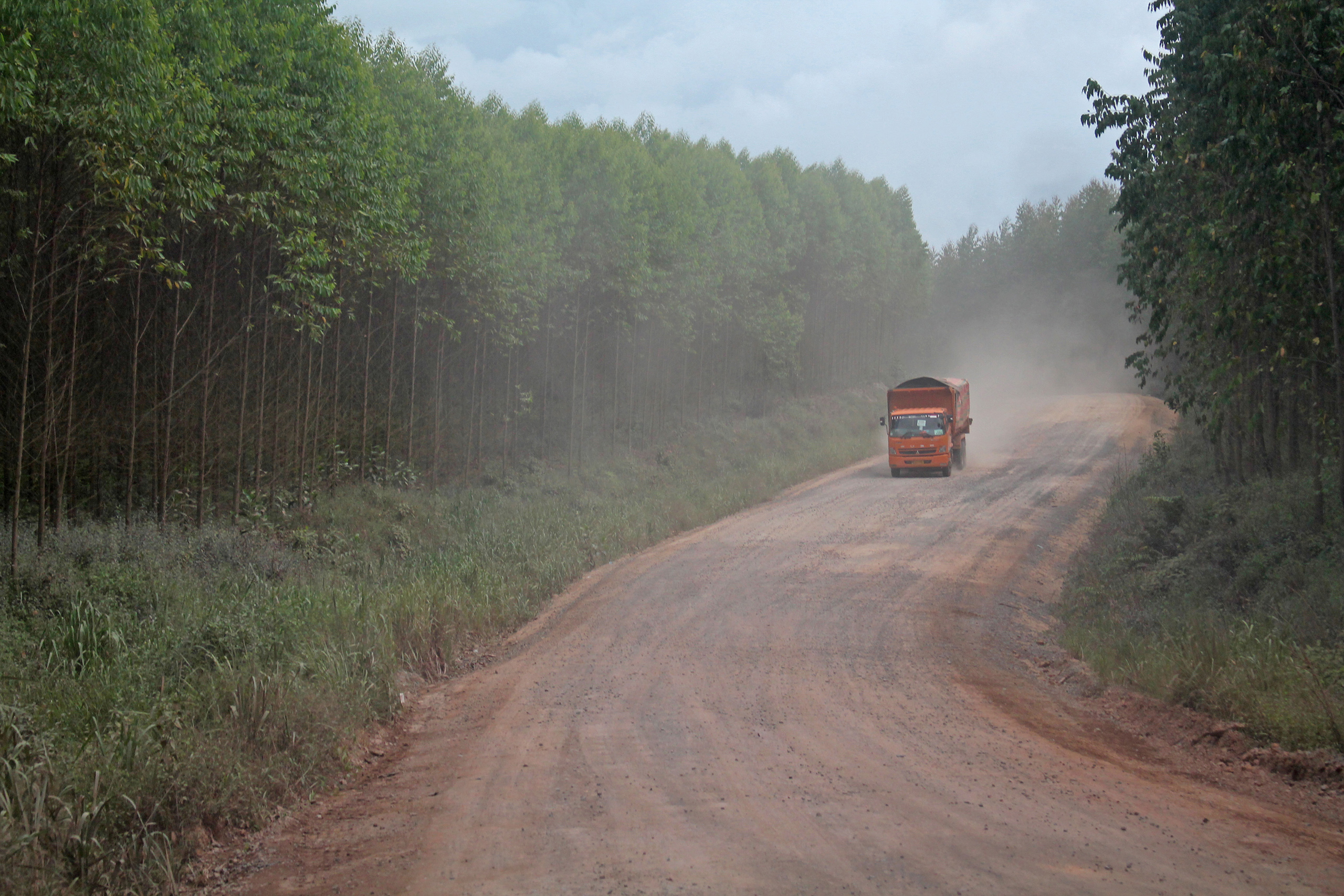 A road to more mining

For coal companies, the road provides an opportunity to massively increase mining and exports. Ibrahim, PT Triaryani’s head of external affairs, said the narrow road has constricted business. Triaryani’s 2,143 hectare concession contains at least 406 million tonnes of coal, yet only 20 hectares has been mined so far.

“We have the largest coal reserve compared to other companies here,” said Ibrahim.

However, the current road’s capacity is only 400 trucks per day, and there are deep potholes which turn muddy when it rains.

Shifting from the existing muddy road to a brand new highway carries the risk of increasing illegal activities in the forest. Besides disrupting animal habitat, PT Reki fears the road will also worsen conflicts between farmers and the Batin Sembilan community.

Hospita said that clearing the forest for the mining road could also make it easy for illegal loggers to enter. Even with the current road, people have been entering the forest area and illegally growing oil palm and cutting down trees, which has triggered conflict. “If the road is built, these things that threaten the forest will easily enter,” he said.

This report was completed in collaboration with the Pulitzer Center and first published in Majalah Tempo.