On 28 October, President Moon Jae-in stated South Korea would achieve net-zero carbon emissions by 2050. This came hot on the heels of Japanese prime minister, Yoshihide Suga, announcing the same, and China’s pledge of net-zero by 2060. These commitments, from the three largest economies in East Asia, have generated global interest.

Antonio Guterres, secretary-general of the United Nations, praised the announcement in a statement: “This is a very positive step in the right direction after Korea’s exemplary Green New Deal.”

Back in July, the South Korean government had announced an ambitious US$65 billion “Green New Deal” but stopped short of setting a carbon-neutral target. How did South Korea finally establish the target, and what are the prospects for it being reached?

While climate-conscious communities in South Korea and around the globe have celebrated the goal, many have stressed the difficult tasks that must be achieved to get there. The most urgent of these are an end to coal power plants and more ambitious 2030 Nationally Determined Contribution (NDC) targets for aligning South Korea with the Paris climate agreement.

Contents hide
1 How the pledge came about
2 The coal question lingers
3 Private sector compelled to act first
4 What comes next?

How the pledge came about

In fact, a 2050 net-zero pledge was part of the Democratic Party’s election manifesto in April 2020, which also included a “Green New Deal” to decarbonise the economy with massive public spending and private investment. But when the party clinched a landslide in the election, it backtracked from such climate ambition and announced a “Korean version of the New Deal” in May, with a solely digital focus, to stimulate growth without notable green elements.

Then a concerted push by some MPs combined with local governments and civil society resulted in the Green New Deal being inserted into the deal in mid-July.

In June, more than 200 South Korean local governments had declared a “climate emergency” – the largest number of signatories for a single statement, according to Local Governments for Sustainability (ICLEI). In their announcement, local leaders emphasised the urgent need for the country to declare its commitment to carbon neutrality by 2050. Aligning with that, they agreed to expand the use of renewable energies to drastically reduce emissions, as well as establishing plans for attaining energy independence.

The move was not a surprise as some local governments had already taken bold initiatives of their own. Earlier this year, the Seoul metropolitan government announced a carbon-neutral goal by 2050 and South Chungcheong, which generates half of the country’s coal power, became the first Asian jurisdiction to join the “Powering Past Coal Alliance”, launched by Canada and the UK in 2017.

Now, South Korea will invest 73.4 trillion won (US$65 billion) in an effort to create 659,000 jobs through the Green New Deal. This includes energy-efficient renovations for public buildings, expanding renewable energy, and promoting more climate-friendly transport options such as electric and hydrogen-powered cars.

However, the Green New Deal was criticised for being just an amalgamation of existing plans from across various ministries, lacking comprehensive carbon reduction plans throughout, and leaving intact the current fossil-fuel centred electricity system and the environmental regulatory framework. 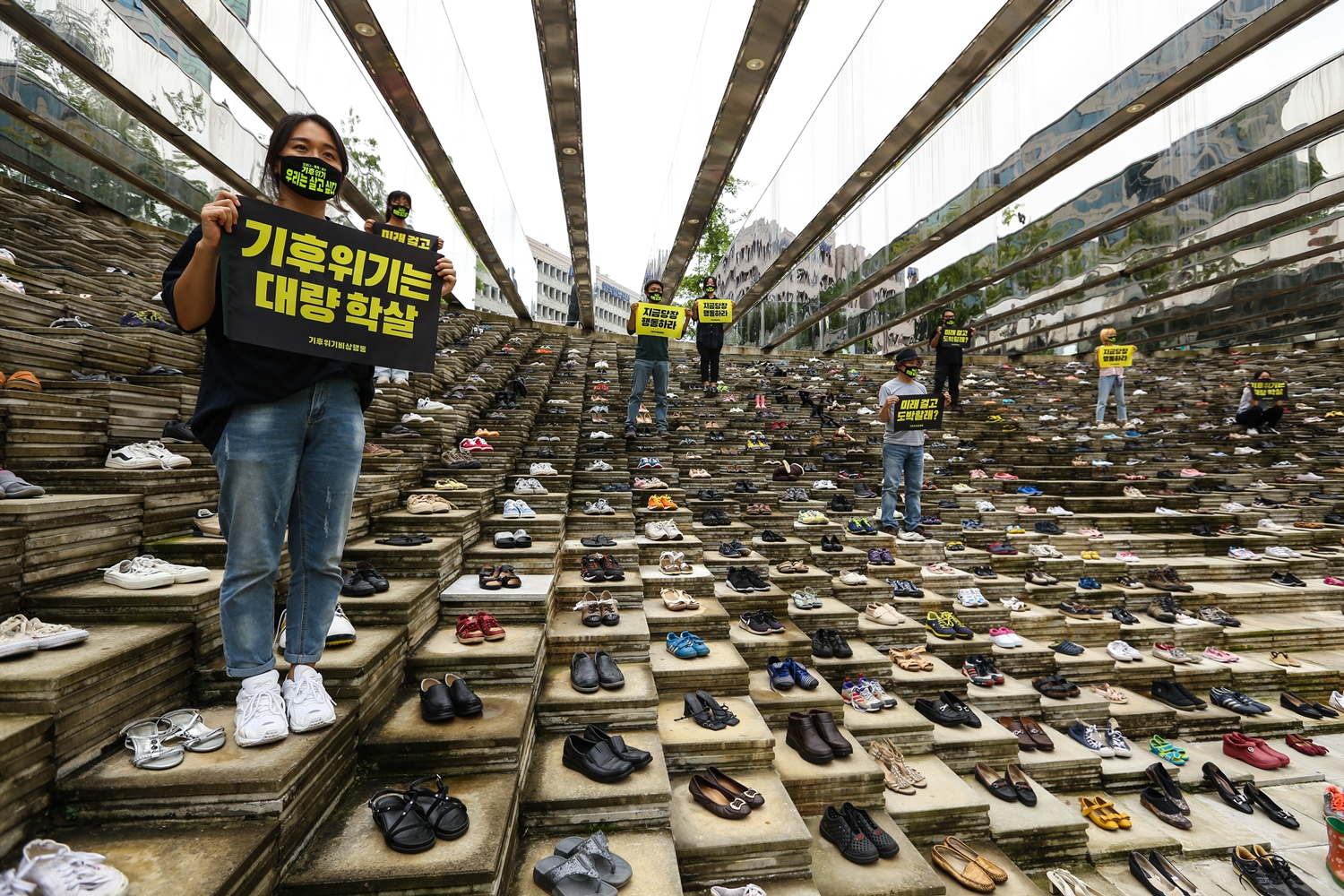 A coalition of more than 300 civil society groups displayed thousands of pairs of shoes from citizens who wanted to participate in the climate march during the Covid-19 pandemic. (Image: Climate Crisis Emergency Action Network)

Since early this year, South Koreans have been building a powerful climate campaign, staging protests on and offline, including teenagers going on school strikes and sending letters to MPs asking for climate action. The momentum has only increased. In September, thousands of pairs of shoes from every corner of the country were displayed in central Seoul to show the people’s desire to march together against the climate crisis when they couldn’t take to the streets due to the coronavirus.

The Korea Beyond Coal campaign was launched in early September, calling for a coal phase-out in the country by 2030, rather than after 2040 as per the government’s current plan.

In late September, the National Assembly, where the ruling Democratic Party has a supermajority, also weighed in, passing a resolution declaring a climate emergency, adding more pressure to the Moon administration. The resolution, although non-binding, clearly states that it will strengthen the 2030 emission target, in accordance with the 1.5C target of the Paris Agreement, by establishing a long-term low greenhouse gas emission development strategy.

Under mounting pressure from civil society, with banks, companies and even local governments moving to decarbonise themselves and parliament asking for higher ambition, the central government couldn’t but pledge the 2050 goal.

“We believe that the 2050 carbon neutrality pledge is a success achieved through the actions of countless citizens fighting against the climate crisis”, said the Climate Crisis Emergency Action Network, a coalition of more than 300 civil society groups. However, it stressed this is just a starting point and that the climate crisis cannot be solved by following the same economic growth paradigm that created it in the first place.

South Korea is the world’s 12th largest economy but 7th largest carbon-emitter. Climate Action Tracker labelled it a “climate villain” in 2016, along with Saudi Arabia, New Zealand and Australia.

The think-tank said South Korea’s per capita emissions were rapidly increasing and that public financial institutions continued to invest in coal. A weak 2030 carbon-reduction target was also pointed out.

Things went unchanged despite the naming and shaming, and plans for seven new domestic coal power plants went ahead. The export of two coal power plants to Indonesia and Vietnam were approved as recently as June and October respectively, when the government was already preparing or implementing the Green New Deal.

Unless we talk about a specific way we are going to take, the 2050 net-zero declaration will be just empty rhetoric

A recent report jointly released by lawmaker Yangyi Wonyoung of the ruling Democratic Party, Greenpeace, and Korea Sustainability Investing Forum shows that South Korean institutions, both public and private, have financed US$50 billion worth of coal projects in the past 12 years, and that 92% of the overseas projects among them, with an investment of US$9.4 billion, were supported by public institutions. South Korea and Japan remain the only OECD countries still investing public funds in overseas coal projects.

The nation’s contradictory actions have been strongly criticised by the international community. Regional and international environmental groups pointed to the “contrast” between such decision and the Green New Deal, and foreign diplomats also showed their concerns over the coal investments. John Murton, the British COP26 envoy, tweeted right after the Vietnamese project was approved: “Why lose money building new coal that makes tackling climate change harder?”

Progressive politicians have tried to intervene. MPs from the ruling Democratic Party have proposed four bills to ban all South Korean public financial institutions from investing in overseas coal. The prospect of these bills is still uncertain, but they have certainly strongly signalled to the market that coal-related business is no longer promising.

MP Lee Soyoung, who proposed one of the bills, said: “We will develop the necessary laws and policies to facilitate this huge societal transition (heralded by the 2050 net-zero pledge).”

“It will encourage other countries which are still deliberating over a 2050 target year, especially considering that Korea is still heavily reliant on the manufacturing industry and other high-carbon industries,” she added.

For the past few years, private capital in South Korea had already been moving slowly toward a low-carbon economy, partly creating the conditions for the central government to make bolder commitments.

KB Financial Group, one of the four largest private banks in the country, announced an end to financing new coal projects at home and abroad in September. It’s the first big Korean private finance player to issue such a declaration.

In mid-November, Samsung’s financial affiliates also announced their coal exit plan. In particular, Samsung Life and Samsung Fire & Marine, the biggest coal investors in the country who have poured US$14 billion into coal projects over the last decade, said they would no longer invest in corporate bonds for building coal-fired power plants or underwrite insurance for such projects.

In non-financial sectors, Samsung C&T became one of the first to join this trend. As per a statement on 28 October, the company will completely stop new coal-related projects to comply with their sustainable management policy, which vows to tackle global climate change. Samsung may not have taken this action without pressure from national and international campaigns. Among them, teenagers from the Youth 4 Climate Action group, famous for filing a climate lawsuit against the South Korean government, held protests online and on the streets demanding Samsung withdraw from the Vung Ang2 coal-fired power station in Vietnam. 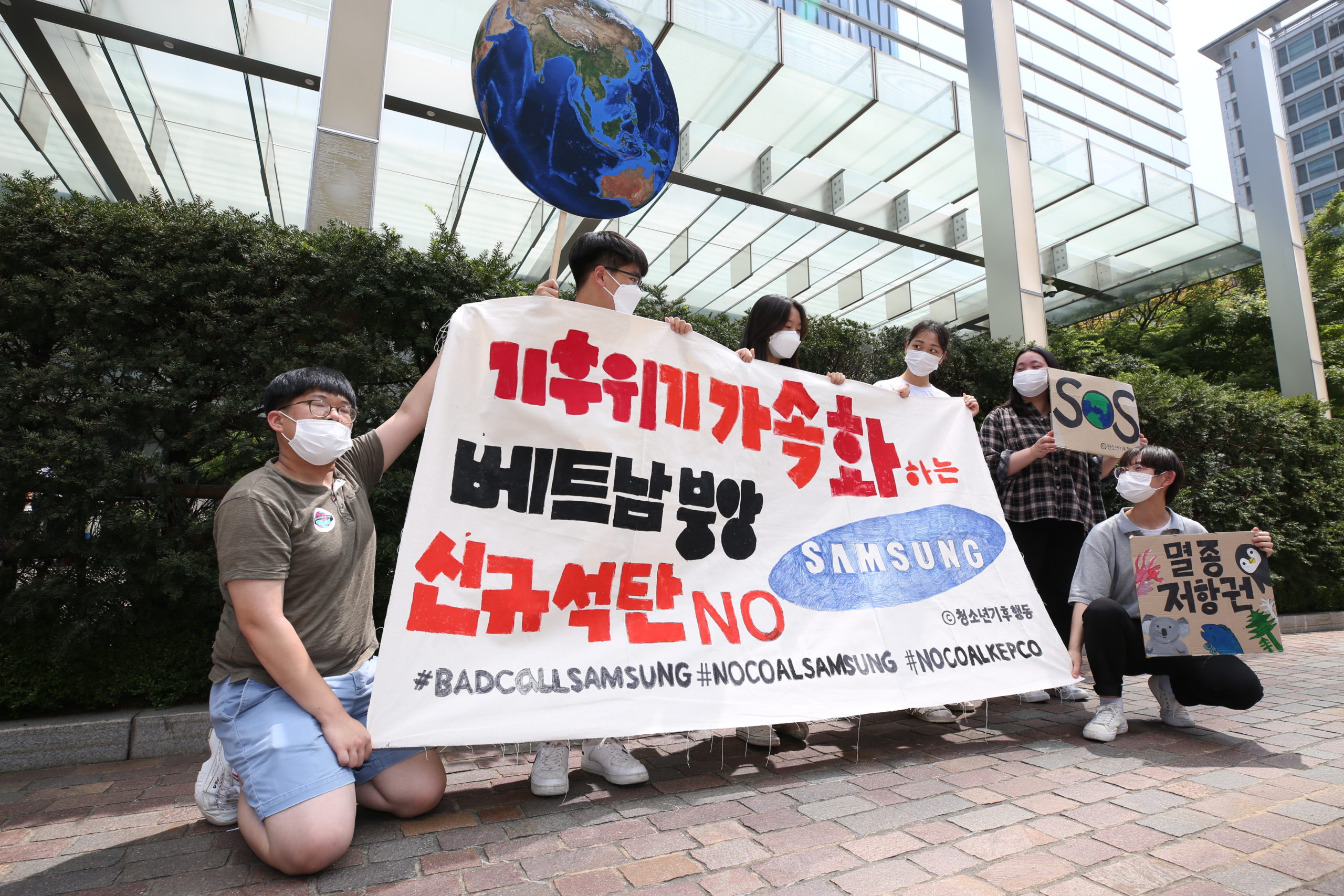 Pressure from global investors demanding climate-responsible business practices has also reached unprecedented levels. Two international pension funds – Legal & General Investment Management in the UK and AkamdemikerPension in Denmark – have publicly criticised Samsung’s participation in the Vung Ang 2 project. Most recently, Nordea, northern Europe’s largest asset manager, along with 22 other European investors, sent a letter to South Korean as well as Japanese and Chinese firms involved in the project, warning them that the project will suffer from high climate-related financial and reputational risks.

With Biden’s victory in the US presidential election, South Korea’s politicians are expecting the Green New Deal to gain momentum. A bill aiming to establish the foundation of the Green New Deal was proposed by the ruling Democratic Party on 10 November, two days after the election result was declared. If it gets passed, Korea will become the seventh country in the world to have written a net-zero pledge into law.

But despite the significant progress taking place recently, challenges remain.

Kim Joojin, managing director of Seoul-based NGO Solutions for Our Climate, welcomed the country’s net-zero pledge but emphasised the importance of next steps.

“The most urgent tasks are enhancing its 2030 emissions reduction target, presenting a clear roadmap to phase out coal by 2030, and putting a complete stop to coal financing,” he said, adding that the country needs fundamental changes in its energy policy.

In fact, South Korea’s Nationally Determined Contribution target, supposed to be submitted by the end of this year, is likely to remain at 18.5% lower emissions than in 2010. This is far less ambitious than the 45% reduction recommended by the IPCC.

Additional concerns have been raised that the Green New Deal is too corporation-friendly, and lacks input and insight from local, small-scale businesses which will be integral to the changes being made.

To avoid the failures of the “Low-carbon Green Growth” strategy implemented by ex-president Lee Myung-bak in 2008, the new Deal must address relevant policies in detail. The 2008 initiative invested enormous sums on the Four Major Rivers Restoration, basically a massive construction project, and nuclear power projects instead of renewables. It was largely regarded as a “greenwashing” attempt by South Koreans because in the end did not help reduce emissions.

“How can Korea expect to be net-zero in 2050 while adding more coal power plants?” asks MP Jang Hye-young from the Justice Party.

“Unless we talk about a specific way we are going to take, the 2050 net-zero declaration will be just empty rhetoric”, she added.

The post Is South Korea on the right path to carbon neutrality? appeared first on China Dialogue.